It seems like there’s a new sex app out there every week, promising to be the next best thing for getting laid. We’re all eager to find the right casual date, and we’re all hoping the next person we connect with is the one that teaches us a thing or two about the word “pleasure” in detail. Or maybe we just want to get pounded.

Whatever it is, the hundreds of casual dating sites out there can border on overwhelming. And while it is true that there’s a site out there to satisfy every craving – whether that’s a queer-specific site, kinky, BDSM-oriented, polyamorous, for likeminded professionals, for cheaters, or whoever else, we all know there’s one dating site that’s more famous than all the rest.

One that’s a household name that we probably have on our phones. As much as I hate to say it, the best thing for you getting laid? The one that stands a cut above the others when it comes to actually facilitating a casual encounter tonight? Tinder.

The site has numbers on its side – over 50 million people use it worldwide. It’s one that even the smallest towns are in on, and it’s conveniently (and creepily) GPS-oriented, so it matches you with cuties closest to you. Mostly nonjudgmental, Tinder is there for whatever your needs are in a hookup. We all have gotten laid through Tinder (or know someone who has). Tinder is your friend – if you play your cards right.

Unfortunately, users often find themselves ghosted, catfished, or surprised by the person in front of them. We all have a Tinder horror story, but that doesn’t mean there isn’t success to be had. Where it falls apart generally starts with a blend of not reading the other person’s profile, and not paying attention to your own: a bad batch of photos, a blank bio, and only vague ideas, are all ways to set yourself up for disaster.

With a few profile tweaks and a more curious eye on who you swipe on, you’re on your way to a successful date.


Meeting someone from Tinder

The most important thing is honesty. It may seem par for the course to pretend to be interested in a relationship just to get laid, but the truth is, that doesn’t end well for either of you, and no matter what stereotypes you may believe, there are plenty of people from all walks of life and demographics and genders dying to get some good casual fun under their belts.

That honesty, however, has to have finesse. Don’t be lewd, even if you both just want to have sex. Be direct in looking for something casual, but say it nicely, charmingly, and engagingly on your profile. By letting people know before they swipe that you’re just looking for some low-key fun, you’re drawing in other people who are on the same page.

Even though all you want is sex, it’s the norm to meet people out on the town first and have a drink, go dancing, and get a feel for each other. Include in your profile the things you’d like to do for fun – and make sure they’re interesting.

Put in the effort

I won’t lie and say Tinder is a cakewalk. It’s amazing because of its popularity, but that same appeal is also a problem: a lot of people are jockeying for a date with the same folks you are.

In other words: step up your game. Now, I’m not going to say anything remotely like fat shaming or enforcing gender roles – people are into different things, and all of us deserve to get sexy. What I will say is that you have to, whatever this means to your body and vibe, take care of yourself and your appearance – especially when looking to hook up.

When you take your main photo, make sure your hair is clean and you’re in good light. Choose an angle that’s inviting (not too high or too low), and be doing something more than sitting at your computer or in your car.

No matter your style, take care of your damn skin. You can have chronic acne and still have a glow if you take care of yourself. People will think you’re dingy if you look like you’ve never washed your face or moisturized. When people meet you in the real world for a hook up, remember that the only thing they’re in it for is your hot self, too, so give them something they can’t resist.

Finally, choose pictures that aren’t just you taking selfies in the same bathroom, office, or car – let people know why you should be chosen for the banging out of all the other fish in the digital sea. Photos of you doing an activity, smiling, laughing, or wearing a costume are all great. Character goes a long way – after all, you talk to the people you sleep with beforehand at least a little, right?

Don’t ever do this

So you’ve gotten that match thanks to your quality photos and honest profile – congrats! You’re not out of the woods yet. When you match with someone, the game is up if your reply isn’t thought out, or worse, is outright vulgar. Unless you want some radio silence, put a little leg work into what you’ll say. Message them with something interesting that shows you looked at their profile. By sparking an interesting topic, you’ll at least get an answer back. After a little ping-pong of conversation, suggest meeting somewhere.

If you want to keep someone interested, don’t suggest meeting at your place – too many of us have watched true crime shows for that to land well. Instead, suggest somewhere interesting, fun, and quirky – give them an offer they can’t refuse.

Get on out there!

You’ll never know how successful you’ll be unless you start swiping – so start polishing your profile now. These tips may be simple, but if you want to get laid on Tinder, you’ve got to put in the work – the cuties are waiting and the numbers are in your favor, so get on out there and push your luck. 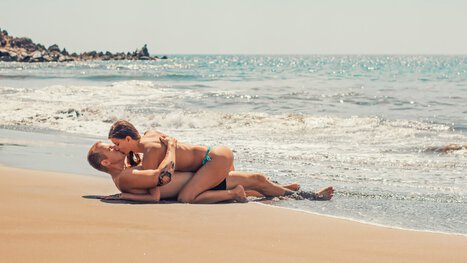 Adults Only Apps? 5 Free Apps
Looking for an app that won't break its promises to get you laid? Here are five sites that deliver – and one guarantees a spicy time once you have a date in the bag.

Sex Personals? 5 Best Sites
Thankfully, there are still sites out there that want you to meet the person of your dreams – and we’ve put together five of the best.
Angie [1 mile away] wants to bang